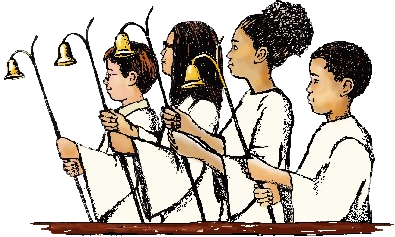 Being an altar server is a sacred privilege and a very special responsibility. These guidelines outlines the policies for altar servers, our expectations of you, and how we serve Mass here at Christ Our Redeemer. All altar servers are expected to study the information below and understand its contents.  For more information, please contact the Altar Servers Coordinator on the CONTACT page.
​

Before Mass the Altar Server Will

Arrive 15 minutes before Mass begins.
​The altar server knows the various parts of the Mass. You know that the Mass has two general parts: the Liturgy of the Word and the Liturgy of the Eucharist. There are Introductory Rites to “introduce” the first part and Concluding Rites following the second part. The first part is a preparation for the second and more sacred part of the Mass.Memorizing the outline of the Mass will help you to be more confident on the altar by knowing what is occurring or about to occur at all times. This will help you to move slowly and deliberately from one action to another without looking like every action is a surprise to you. An altar server needing to be reminded when an action is supposed to be happening is like a leapfrog on the altar jumping up and hopping from one action to another. Knowing the framework will allow you to follow smoothly from one action to another adding to the sacredness and dignity of the Mass and not subtracting from it as a distraction.
​

Outline of the Order of the Mass

Liturgy of the Word

Liturgy of the Eucharist

Entrance Procession: There are usually three servers assigned for a weekend Mass. When we are ready for Mass, assemble in the Narthex (back of the church) at the center aisle, just in front of the Baptismal Font.

After the people have begun singing the first verse of the opening hymn, server 1, the cross bearer leads the procession down the aisle with servers 2 and 3 walking two pews behind both even with each other at a reverent pace. When incense is used, server with the censor (Thurable) walks in front of cross bearer. If incense is not used, and there are four servers, the server without the cross walks behind servers 2 and 3.

​Arriving in front of the altar, the cross bearer continues without stopping and places the cross in its place for Mass. Everyone else stops and lines up in front of the bottom step. The priest and deacon will take their places in between the two sets of servers. When the priest bows, you bow also and then proceed to your place in the pew behind the credence table.

The cross bearer server will bring the Roman Missal to the priest at the times when it is needed. Make sure that you hold the book with the front cover facing away from you. When the priest gives you the open book to hold, rest the top of it against your chest, and hold the bottom slightly away from you. This will prevent the book from moving while you’re holding it and will make it easier to hold. Whenever you are not carrying anything, you should have your hands prayerfully folded in front of you.

Penitential Act, Gloria, Opening Prayer: When the Gloria is ended, the server with the Roman Missal walks over by the priest, so that when the priest says “Let Us Pray,” you are standing right by his side ready to go, holding the Roman Missal for him for the opening prayer.
​

Liturgy of the Word

Please remember that you are very visible where you are sitting so that anything you do, the people can see. Make sure that you maintain proper attitude during the whole Mass. There should be no inappropriate talking or giggling. Make sure you sit erect and do not slouch over the pew or on the kneelers.

If Incense Is Used At The Gospel: If incense is used at the gospel, the server designated as Thurifer who is not server 2 or 3, or cross bearer will bring the Thurable and the boat up to the priest. He will then put some incense into the censer. The server will go to the front of the altar and in the center face the altar with your back to the people. When the deacon comes around to the front of the altar with the Book of Gospels; this server will then lead the deacon to the Ambo. The server will stand just behind the Ambo and close to the Altar steps.

Liturgy of the Eucharist

​Preparation of the Gifts: At the Offertory, the servers will bring the following items to the altar in this order: When done, bow your heads to the altar and then proceed to your chairs.  When the priest goes to the center aisle for the gifts, three servers go with him. One stands on left of priest, and two to the right of the priest. The priest will hand the gifts to you. Usually one will receive the wine cruet, the other will receive the ciborium with the hosts, and the final one the offering basket. The priest will go to the altar. Both servers will stand behind the deacon. The deacon will take the wine from the server and then give the wine and water back to the server. The deacon then takes the ciborium with the host from the other server and hands it to the priest. Both servers then bow toward the altar and return to the credence table. The server who has the water cruet will place it on the credence table and pick up the finger bowl and the other server will pick up the finger towel. They will go close to the priest and waits for the priest to finish his prayers. The priest places his hands in the bowl then removes them. The priest will then turn to the other server and get the towel to dry off his hands. This server should have the towel open.

If Bells Are Used: The server assigned the task of ringing the bells will come to the first step and kneel on the pad next to the deacon’s chair. The bells are also located next to the chair. During the Eucharistic prayer after the priest says, “My Body, which will be given up for you” and he holds up the host, the server will bend down and pick up the bells and gently ring them for about two or three seconds and then puts the bells back down again.  Later, when the priest says, “Do this in memory of me,” he will hold up the chalice at which time the server will ring the bells again for two to three seconds. These are the only two times they bells will be rung.

Stand for the praying of the Our Father. Pray it out loud.

Sign of Peace, Lamb of God: At the Sign of Peace, all servers should shake hands with each other (quickly) and with anyone who may be seated behind you. Then immediately turn back facing the altar and keep your eyes on the priest and deacon just in case they need your assistance. Servers should bring out the number of ciborias that are already prepared on the credence table.

Communion: You may receive either on the tongue or in the hand. You may also receive the Precious Blood from the cup. When all of you have received, return back to your seats and sit quietly, praying in thanksgiving for the gracious gift of the Eucharist. During communion, one server will go to the altar and remove the Roman Missal and the Chalice and place them on the credence table. After communion when the deacon indicates the servers will remove any items given to them by the deacon and place them on the credence table. The deacon will purify the vessels after communion, and return to his chair. There is usually silence for a time at this point.

The cross bearer will return the Cross to the front of the church.  The rest of the altar servers change out of their alb sand hang it up properly in the Altar Server Changing Room.