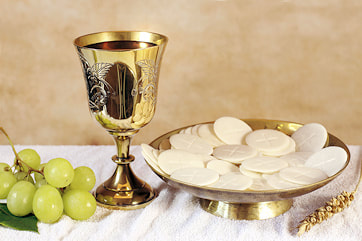 Bishops, Priests, and Deacons distribute Holy Communion by virtue of their office as ordinary ministers of the Body and Blood of the Lord. When the size of the congregation or the incapacity of the bishop, Priest, or Deacon requires it, the celebrant may be assisted by other bishops, Priests, or Deacons. If such ordinary ministers of Holy Communion are not present, EMHC may assist him, i.e., formally instituted acolytes or even some of the faithful who have been commissioned according to the prescribed rite. In case of necessity, the Priest may also commission suitable members of the faithful for the occasion.
​

It is important that those individuals selected to serve as EMHCs be chosen carefully. The instruction Immensae Caritatis describes the qualifications: “The faithful who are special ministers of communion must be persons whose good qualities of Christian life, faith, and morals recommend them. Let them strive to be worthy of this great office, foster their own devotion to the Eucharist, and show an example to the rest of the faithful by their own devotion and reverence toward the most august sacrament of the altar. No one is to be chosen whose appointment the faithful might find disquieting.”  The following norms also apply: ​

Mandate from the Bishop

After the individuals have been selected and trained, the pastor then submits a list to the office of the Director of Liturgy of the diocese who will submit them to the Bishop. When the mandate from the Bishop is received, they must first be commissioned before they are allowed to function as an EMHC. In the diocese of San Bernardino an EMHC is mandated for a period of five years. This is done by the Bishop, upon request by the pastor of the parish.
​

Considerations Prior To And During Mass

If a particle of the host falls on the floor, it should be picked up and consumed. If for some reason it cannot be consumed (for example, if it has already been in an individual’s mouth who is unable to consume it, pick up the host and give it to the Priest or Deacon. In the case of spilled Precious Blood, the EMHC should insure that no one steps on the spot, by putting his or her clean purificator over the spill.

​Then, (with the assistance of the Deacon or an EMHC) water should be brought and poured over the spot. The resulting spill should later be blotted with a purificator to remove as much as possible. If some of the Blood of Christ should drop on an individual’s clothing or possessions, it should be brought to the attention of the Priest or Deacon who will treat it in the same way, with due respect for the individual involved.

When the Eucharist is distributed under both forms, the Deacon ministers the chalice. When the Eucharist is distributed under the single form of the host, the Deacon assists the Priest in distributing the host if needed. The number of concelebrating Priests and the number of Deacons serving may vary for different occasions, therefore the number of positions to be covered by an EMHC will vary. If one Priest and one Deacon are present, as is our norm, 6 EMHC will be needed.  Communion is under both species at all Sunday Masses.
​